Before dawn on June 30, 1966, in Shizuoka Prefecture, a family of four who ran a miso company were killed and burned. This is referred to as the "Hakamada Incident." Iwao Hakamada, an employee, was accused of the crime due to prejudice that "a former boxer would do such a thing" and was arrested. After lengthy and brutal interrogations, he was forced to confess. Iwao consistently maintained his innocence, but the court sentenced him to death. Since then, he has continued to request a retrial, and from prison, claimed his innocence.
On March 27, 2014, the court decided to reopen the case. On that very day, Iwao was released due to "evidence against him being suspected of fabrication by police detectives" and "an unbearable affront to justice that he continued to be held in confinement." Nevertheless, in the TV news footage, Iwao does not show any joy of being released after 48 years of incarceration. He was physically free, but he looked as though his mind was still constrained and his emotion tightly closed.

After his release, he was at Korakuen Hall in Tokyo. When he donned an Honorary Champion's belt in the ring, it seemed like his boxing memories came back. He held up his fists and stood in a fighting pose. Beside him was his older sister, Hideko, with a full smile. She believed and supported him throughout the years. Filming began that day, documenting their "day to day life after 48 years."
At one time, Iwao is Superintendent General of the Metropolitan Police, and at another time, a judge or an undefeatable emperor. He claims he is the all-powerful lord of the world. He declares the "Hakamada Incident is over. No false accusations. No capital punishment." In a small solitary cell, daily fear of execution gradually swallowed his anguished cry of innocence and induced him into a "world of delusional dreams."
After his release, Iwao acquires an ordinary life. He sleeps on a futon, goes shopping, enjoys his favorite red bean buns, relaxes in the bathtub, watches TV, plays Japanese chess, dozes off, gets angry, laughs...
The "world of delusions" is gradually embraced by the "real world" of ordinary life, and dissolves. Being mediocre and ordinary might actually be an exceptional thing for anyone.

The "freedom" I had to learn about during my long life in prison
has both a kind of poignant regret and a bright glare in it.
I keep asking myself renewed questions.
When will I, who have committed no crime, recover my freedom?
(from Iwao Hakamada's prison diary)

The film draws close to the "ordinary life after 48 years" of a man, who was incarcerated for 48 years facing death, as he regains his lost time and identity, and quietly tells a story of the preciousness of "living." 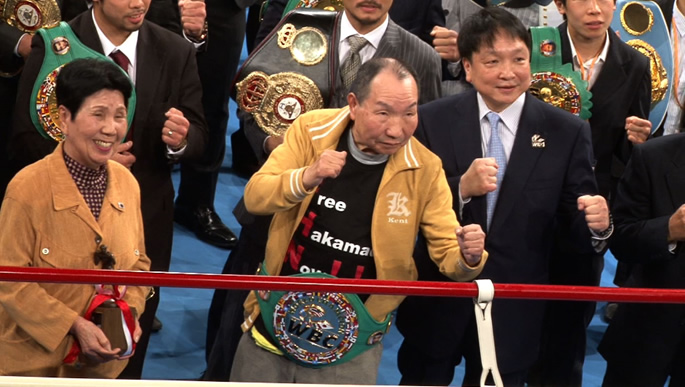 Mr. Iwao Hakamada was awarded an honorary championship belt
from WBC World Boxing Council on May 19, 2014